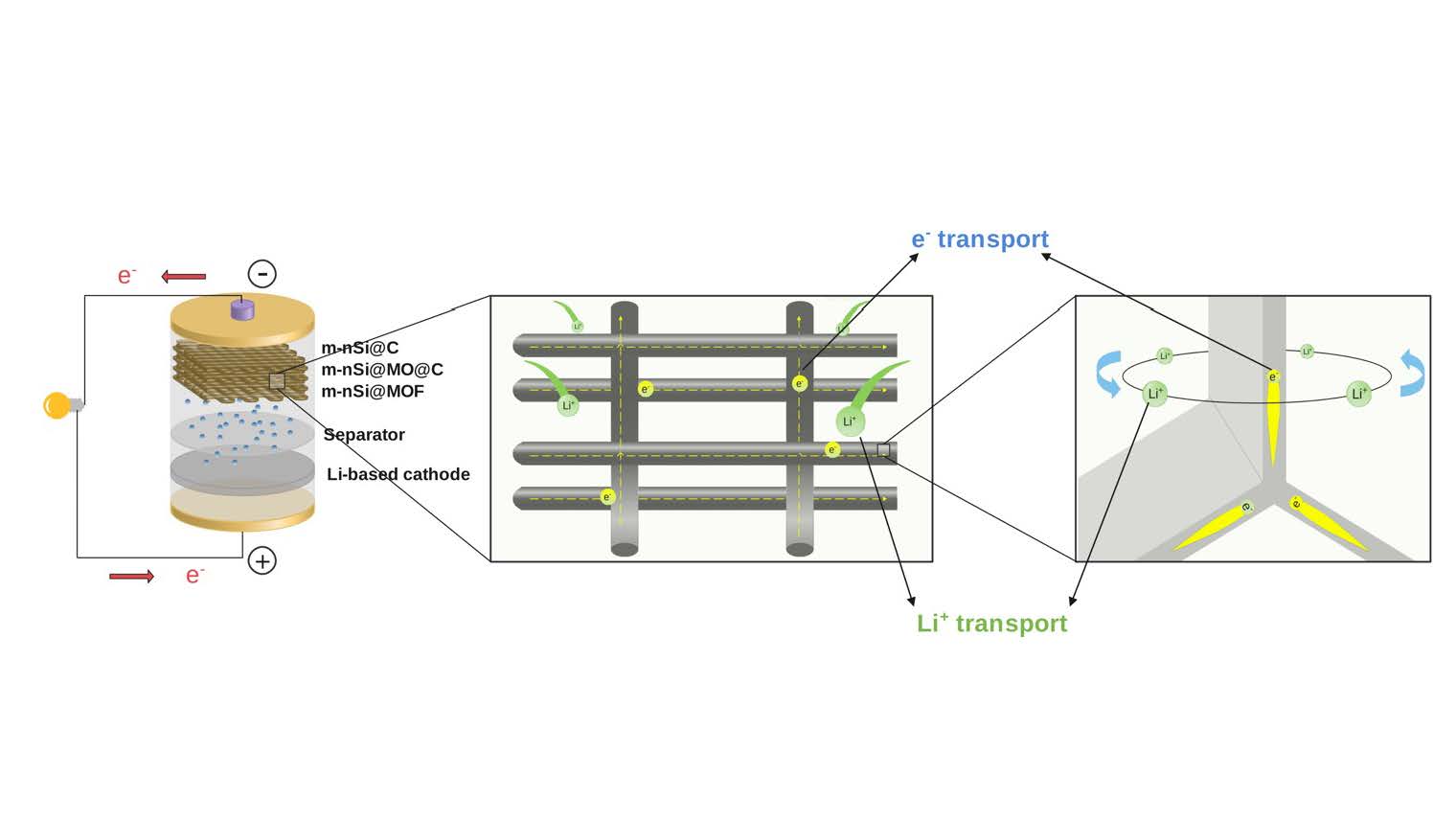 Researchers Pablo Taboada, Silvia Barbosa, Gerardo Prieto and Adriana Cambón (iMATUS), and Pablo del Pino, Beatriz Pelaz and Ester Polo (CIQUS) will create silicon anodes for batteries by 3D printing within the project “Silicon-Based MOF-Derived Nanomaterials for Additive Manufacturing by 3D Printing of the Next Generation of Lithium-Ion Battery Anodes (MOFSiAN)”, belonging to the call “Strategic Projects Oriented to the Ecological Transition and the Digital Transition 2021”.

Electrochemical energy storage (EES) is one of the most promising technologies for exploiting the potential of renewable energy sources in order to guarantee sustainable industrial growth and reduce greenhouse gas emissions greenhouse and other pollutants, for which the worldwide promotion of electric vehicles (EV) is another of the strategic bets. Among the various EES devices, lithium-ion rechargeable batteries (LIBs) currently dominate the market, being used to power next-generation portable electronic devices, medical instruments, and electric vehicles thanks to their energy density, light weight, long lifespan, etc. However, LIBs are approaching their maximum theoretical capacity, which limits their use in long-range EV/HVE, and in large-scale storage systems that allow renewable energy sources to be more adequately managed. Therefore, there is a high demand for batteries with higher energy densities, power, lifespan and shorter recharge times. To increase energy densities and conversion efficiencies, the following are urgently needed: i) new designs of materials that configure the electrodes of LIBs, as well as ii) their integration through more flexible, cheap and profitable manufacturing processes, given the high immaturity of other alternatives such as Li-S, Li-air batteries, or other types based on metal-ion and metal-air (metal = Na, Mg, Ca, Al, Fe, K).

This project will combine the design and characterization of porous nanosilicon@metallo-organic network (m-nSi@MOF) nanoparticles and hybrid composites derived from MOF with heart@shell structure, nanosilicon@carbon (m-nSi@C) and nanosilicon @metal oxide@carbon (m-nSi@MO@C) poroso, as new anode materials for LIBs with the aim of exploiting the excellent theoretical capacity and low Li ion absorption voltage of silicon while overcoming the drawbacks associated with process such as: the excessive change in its silicon volume during its lithiation-deslithiation and its deficient electronic conductivity and diffusivity of Li, factors that impede its commercial development.

To meet the growing demands for EES systems with higher energy and power densities, MOFSiAN also plans to develop an innovative fabrication methodology that will enable the production of thick, porous silicon-based scaffolds with a hierarchical three-dimensional structure and higher mass. active material. To do this, an additive manufacturing technique such as direct ink writing will be used, in which the previously obtained hybrid Si nanocomposites will be the main components of the inks used for the 3D printing of microfilaments that make up the anodes of these new LIBs with high energy density. Throughout the project, a complete understanding of the correlations between the design of materials, the synthesis/production parameters, the nano/microstructures obtained and the electrochemical performance will also be pursued.

In short, MOFSiAN should represent a major step forward in scientific knowledge about LIBs which, if successful, will lead to a key improvement in the technology and its capabilities, opening up new possibilities for existing and future applications.

Activity financed by the Collaboration Agreement between the Consellería de Cultura, Educación, Formación Profesional e Universidades and the USC for the development of strategic R+D+i actions